I recently asked a long-time Southern Baptist pastor why he remains Southern Baptist? We both sat in silence as he searched his mind for a reason. After a minute or so, I broke the silence, “It is heartbreaking that you need to think so hard for a reason to remain…” He disappointedly agreed. What made his delay so heartbreaking is this faithful pastor had served at nearly every level of Southern Baptist life—he is an active and longtime pastor, he has served our local association, the state convention, and recently served as a trustee on the SBC executive committee. He knows well the good that has come from the voluntary cooperation of tens of thousands of churches—millions of individuals participating and cooperating to send and support missionaries, fund six evangelical seminaries, rejuvenate existing churches, plant new churches, and pursue the shared calling of the great commission of sharing the gospel of Jesus Christ and making disciples of all nations. Yet, many of us, cooperating within the Southern Baptist cooperative framework find ourselves on a train heading toward an uncertain destination. The train conductor, company staff, and loyal volunteers assure us that we are still travelling down the track known as the straight and narrow, but I have developed whiplash from the jerks the train has taken to what appears as a parallel course to the culture, and many of us have noticed the sun has started setting on the wrong side of the train. To stay within the analogy, it appears our train has been hijacked.

The reality that Southern Baptists have veered should not be the earth-shaking revelation it has become among some—and a denied truth among others. We are a voluntary association and convention comprised of independent Baptist churches choosing to cooperate around a common statement of faith (the Baptist Faith & Message) and a common mission—literally, domestic and international missions. However, we must recognize that it is the many churches that influence the convention—not the convention over the churches. This is not to say that the convention exerts no influence, it certainly does, it educates a third of all US seminary students through its six seminaries, and some church leaders and members, naively embrace SBC positions as gospel. I think some in the convention regard the SBC as the evangelical magisterium. So, while the SBC does exert some influence, it is an influence generally driven by our messengers and those participating churches—it appears many of those messengers and participating churches are being lulled (or dulled) by the secular culture.

The tragic apathy that has gutted and destroyed many Christian denominations and churches has found its way into cooperating SBC churches—and the rot is spreading. I categorize the problem as apathy because it appears little gets the attention of the average Southern Baptist church. We recently had a plagiarist serve as SBC President, we have pastors preaching that the Bible whispers about sexual sin, the SBC looks utterly lost and confused regarding the sexual abuse scandal, we have women preaching, and some churches even ordaining women as pastors—and in a stereotypical post-modern move, suddenly some leaders in the SBC are unable to define pastor while being quite articulate about what they claim they don’t know. The pace at which these problems are surfacing is alarming and sad. Perhaps the problem is a combination of ignorance, apathy, and duplicity; however, we ought not deny that there is a problem.

Friends, as I mentioned, our train has been hijacked. The theological principles (founded on Holy Scripture and succinctly articulated in the Baptist Faith and Message) that should have bound us together appear to have diminished into a faint façade. The vehicle that so many Southern Baptist churches have used to support our common mission has been compromised. The crossroad many within the SBC are facing is what to do with this uncomfortable situation? Choose to do nothing? Influence through convention participation and voting? Choose to cut Southern Baptist ties and isolate? These options are not exhaustive, but they are a starting point.

Some, and perhaps you reading this post, believe disassociating with the Southern Baptist Convention will fix the problem. I have even read comments about individuals avoiding or abandoning their local church because of issues happening within the convention. This is a disappointing development. Remember, your local church remains your autonomous local church—they are not accountable nor do they follow edicts from the association or convention. Frankly, any individual member within my local church has more influence on my attention and concerns than any individual, committee, or institution within the convention. From a larger perspective, the church does not follow the SBC; the SBC follows the church(es).

This reality regarding the relationship between church and convention highlights the significance of the present problem. The problems arising within the SBC is a reflection of the deterioration of the local church. Churches leaving the SBC does not change the realities of the problem—it only masks the problem. Good churches leaving the SBC permits the rotten churches to expand their influence—influencing missions, seminary education, and platform messaging. Has the quality of the churches changed because a good church ceases to cooperate within the SBC framework? No. In fact, the opposite has occurred because principled and faithful Bible affirming Christians are leaving the fight. This is not about saving the SBC—this is about likeminded Christians, who stand on Scripture as their foundation, affirming the Baptist Faith and Message, holding strong to keep the influences of the world, at a minimum, outside the church building walls. 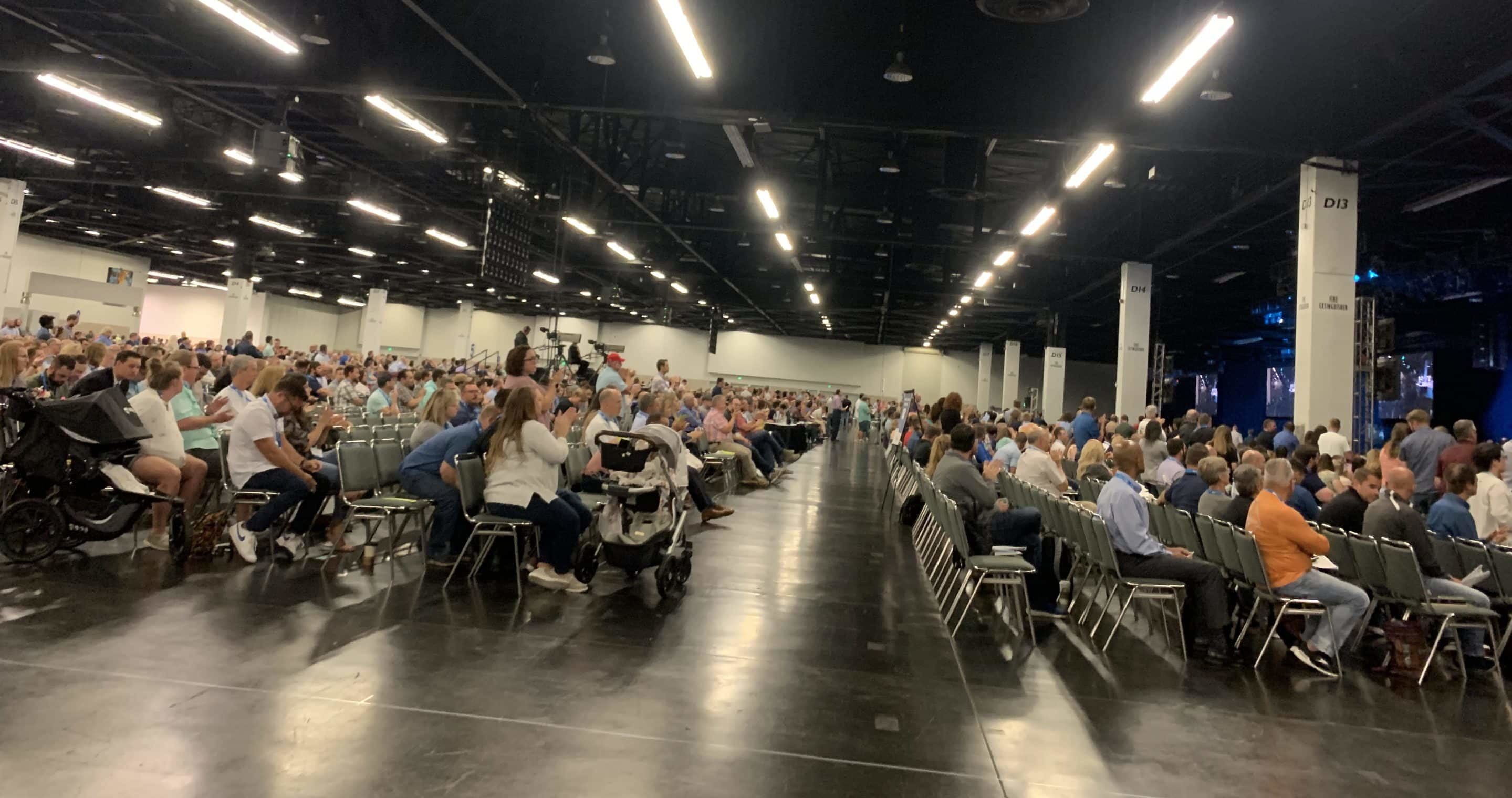 I used the description that our train has been hijacked—yes, we can step off the train. However, we are not the churches at risk, the churches that recognize there is a problem cautiously discern movements within the SBC. We will reject bad SBC policy and politics, we will openly reject secular ideologies like critical theory, we will oppose worldly programs and pop-culture messaging. The churches at risk within the SBC are those without a strong biblical platform, celebrity-fawning leadership, and congregations with influential wolves vying for the pastor’s ear. But, these (types of) churches are not simply SBC churches, these churches are local churches in your hometown, in your county, in your state. Churches near your friends and family; the churches that will be near your grandchildren. The fight in the church is not between SBC vs non-SBC; the fight in the SBC-affiliated church is a microcosm of the battle happening in our broader culture. Your local Baptist church removing Southern from their affiliation or professing itself “non-denominational” does not solve the problem—our problem is not the name on a building, it is one of ideology and theology.

Friends, if you hold to a biblical worldview, this is not a fight to shy away from—the fight within the Southern Baptist Convention is a reflection of a wider war being waged within every community of our country. The only real difference is that the SBC meets once a year and our issues can be openly debated and voted upon. We are a convention with a strong statement of faith, principles, and a storied history, that like the apostle Paul, does not express the gospel as something theoretical, but rather, as a people who have experienced first-hand the grace, mercy, and love of God in the good news of Jesus Christ. Diminishing the size of the SBC simply obfuscates the issues and forces the contentions into the darkness where the enemies of God want the battle fought. Brothers and sisters, let us, “contend for the faith that was once for all delivered to the saints. For certain people have crept in unnoticed who long ago were designated for this condemnation, ungodly people, who pervert the grace of our God…” This is not a fight to save the Southern Baptist Convention, this is a fight “against the rulers, against the authorities, against the cosmic powers over this present darkness, against the spiritual forces of evil.” I for one, choose to take a stand. So, I wonder, brothers and sisters, will you stand or will you surrender?

Other Resources:
It Is Not Just the Southern Baptist Convention That’s At Stake. Here’s What You Can Do.